A guide to microphone etiquette

Don't be the person ruining your coworkers' Zoom calls. Check out our tips on what not to do when with your mic on a video call. 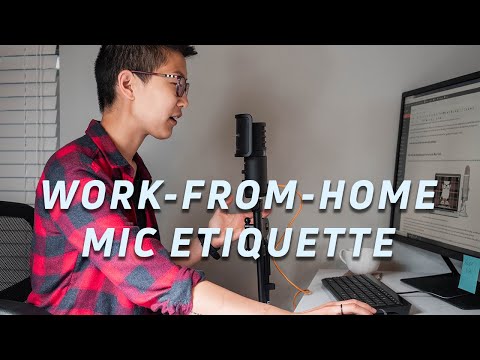 Everyone’s become a little more online in the last year—some might say a little too online. However, while many people have adapted well to a life on the other side of a video call, everyone knows at least one person who just hasn’t. Maybe they sound bad. Maybe they’re just plain rude. Maybe they don’t even realize there’s something wrong with their audio setup.

The first step is getting the hardware you need. Whether that’s a decent pair of headphones or a microphone that won’t make it sound like you’re calling from a tin can in 1912, figuring out what gear to get is key to navigating a digital workspace or social gathering. We have all sorts of articles on what to look for in a gaming headset or a microphone, and lists of the best ones you can find, whether you’re a hardcore gamer or aspiring podcaster.

However, once you’ve actually gotten your hardware in order, there’s still more to think about. There are plenty of technical things to consider, but the secret to a successful call often comes down to maintaining good behavior. Here are a few things to bear in mind.

Don’t forget to mute yourself

Microphones often have buttons and sensors you can tap if you need to quickly mute for an unexpected interruption.

This one’s probably the easiest to deal with, but you’ve got to think about it all the time. Sure, when the fridge is just a few steps away, there’s nothing wrong with getting a little snacky—but just remember to mute yourself. Nobody wants to be interrupted by the crunch of a carrot or a glug of water, and it’s easy to avoid.

The same principle applies for just about anything that happens off camera. Nobody needs to hear the takeout order you call to your roommate or the various and sundry noises of your eventual trips to the bathroom (especially if you’ve got a wireless gaming headset on).

A well-placed microphone can avoid a lot of annoying sounds

Headset microphones that sit on a flexible wire are easiest to fiddle with if mic placement is a concern.

There are few things as distracting in a call as the sound of a microphone getting blown out either. Whether it’s because someone just exhaled sharply right at the microphone, or they’re just loud enough to spike it, this is a straightforward problem to fix.

If you’re using a detached desktop microphone, try to have your mic pointed at your mouth, around 8-12 inches away, and slightly off to the side. Getting a microphone to sit at that distance can be a little difficult, but a decent stand will make all the difference. When you keep to this kind of configuration, it’s easier to avoid breathing directly on the microphone every time you exhale, and cut down on the risk of encountering the proximity effect, when the bass in your voice blows out everything else when you’re too close to the mic.

Adam made a great video on this very subject that includes what to do differently depending on the kind of microphone you have.

If you decide to get a gaming headset, keep the mic to the side of your face, not bent in front of your mouth. Gaming headset microphones definitely need to be a little closer to your mouth, so it might take a little fiddling to get quite right—ultimately, keeping the microphone out of the path of your breath is key.

Echo in the call makes it hard for people to think

If your microphone is sitting this close to your speakers, you’re probably going to need to turn your volume down (or thrown on a pair of headphones).

Okay, you just set up your brand new mic. It’s placed perfectly, and when you talk everyone hears you loud and clear. And then you hear yourself coming back through your speakers—or someone hears their voice through yours. If you don’t want to wear headphones, speaker placement and volume are really important.

Echo is one of the most pernicious issues on most online calling apps these days, and it can be tricky to get rid of it. All it takes is one coworker who can barely get through a sentence or a teammate who can’t hear where the enemies coming from in-game for communication to start breaking down and tensions to start rising.

To fix this, make sure your speakers aren’t pointed at your microphone, or an area covered by its polar pattern (the space around the microphone where it picks up sound). You might need to move your speakers and mic farther away from each other, which might mean having to clean off your desk—don’t worry it’s not as scary as it seems. Turning down your computer volume will probably help too.

If you keep experimenting with angles, distance, and volume eventually you should find the sweet spot where everyone can hear you, but not themselves on your speakers. Or you could always, you know, put on a pair of headphones.

Don’t set up your mic during the call

Remember to make sure your microphone isn’t mute, and not just on Zoom or Discord.

Stop me if you’ve heard this one. You and your colleagues are just about to start a meeting and one of them starts talking, but no sound comes out.

Do everyone a favor and figure out how your audio setup works before that big meeting. Maybe that means hopping in a Zoom call with a friend for 15 minutes to sort it out beforehand, or just making sure everything that needs to be is plugged in and turned on before the meeting starts.

It might be useful to build a checklist. Is your microphone plugged in or connected. Is anything muted—this can be on an app like Zoom or a physical button or switch on a microphone. Do you have the right input and output set—calling apps often default to the wrong microphone and speaker outputs, but it’s easy to switch in the settings menu. macOS sometimes requires you to do this, so don’t forget to check the audio section of the system preferences.

If you’re a hardcore gamer, figuring out how your given platform will interact with your mic is just as important, and it’s not just about PC gaming. Voice chat on the Nintendo Switch and Xbox platforms have all sorts of quirks, so getting things set up before you’re in-game is worth it. Plenty of people have wandered into matchmaking with mics that are totally blown out, non-functional, or worse, a combination of garbled nonsense and static—don’t be that person if you don’t have to.

Getting acquainted with particulars like this means that when an issue does pop up, you’ll be able to fix it fast, too.

The cable of the Razer Seiren Mini lies flush with the back of the microphone when plugged in.

Given the delay between speaking and being heard online, conversations can even get interrupted by people taking part in it. Maybe you’re the jerk who runs roughshod over whoever’s talking at the moment. Maybe you’ve just gotten caught up in that classic “I think, oh sorry, go ahead” refrain too many times.

Regardless, there are other ways to signal you want to talk—in Zoom, there’s a raised hand button, and a chat you can type in. In fact, pretty much every video chat app has some way of nonverbal communication. You could also just keep quiet for a couple extra seconds and make sure the person who’s speaking is actually finished.

On top of not interrupting people, being nice doesn’t just make online interactions less toxic. In video games, it makes the thrill of victory that much more satisfying and the sting of defeat that much less sharp—some people also argue it makes you more likely to win (no substantive evidence of this exists, but it sounds nice, at least). Plus, it is just nice not to see yet another jerk on the internet.

How to set up Bluetooth multipoint on your headphones

Studio headphones: Why you should get a pair